The rental car industry has suffered a dramatic inadequacy: not enough cars to rent. The global shortage of chips combined with the huge dip in tourism demand during the COVID-19 outbreak resulted in a deflated fleet of automobiles for anyone to rent. With more than 770,000 cars in total sold off to stay afloat, many companies were overwhelmed when the demand for rental cars made its sudden rise, consequently resulting in lower profit margins. The low supply of rental cars and the exponentially growing market for them has caused the so-called “Rental Car Apocalypse.” However, some companies managed to come out on top, and one even grew expansively during the recession, Turo.

Turo is a peer-to-peer automobile rental company established in Boston and now headquartered in San Francisco. Turo has gained popularity over the past decade because it is the world’s first car-sharing service to allow people to put up their cars for rent for a long period, generating extra profit when their cars are not in use. In Fall 2021, Turo reported more than 900 employees, 85,000 hosts servicing in 56 countries across the globe with a huge fleet of 150,000 cars, and a $1 billion valuation.

Founded in June 2010 by Shelby Clark, and later on, directed by Andre Haddad, Turo has existed for a decade, shedding many former “skins” and becoming the Turo we know today.

The idea of Turo can be traced back to the fall of 2010 when Clark was living in Boston and had to visit his family outside of the city. Clark found the nearest short-term rental, which was a mile or two away from his location, forcing him to bike through the Boston snow. As he cruised through the streets, Clark saw many cars parking at the side of the road, used by no one. Clark asked himself:

“Why can’t I be driving any of these cars?”

Clark had just found himself a new idea for a startup — a global peer-to-peer car-sharing platform named RelayRides, allowing car owners to rent out their cars for a small profit.

Later, Clark found out that there was no other peer-to-peer car-sharing platform, which at first seemed like a blessing. Nonetheless, it served as a warning — finding an insurance company to insure private drivers renting other people’s cars would be incredibly difficult.

“I underestimated the emotional rollercoaster it would be in the earliest days, it took a year and a half to figure out the insurance conundrum.”

– Shelby Clark on getting insurance

RelayRides and traditional rental services are not alike. In the past, normal rental services were small in size with a centralized area of operations. Before Clark reached out to insurance underwriters, Clark proposed the idea of RelayRides to Bill Curtis, a professional insurance broker in carsharing services. Curtis then helped Clark in persuading the underwriters to approve insuring RelayRides. After numerous rejections, their efforts paid off as an insurer agreed to their idea, provided a plan, and allowed both to venture into the world of business (Turo is currently insured by Liberty Mutual Insurance).

When RelayRides began its funding phase, they found a total of four investors for the initial rounds, one of whom is Howard Hartenbaum, a partner of August Capital. Hartenbaum stated that the company’s concept was “innovative and satisfies the ever-growing market.” The total amount of funds raised was approximately $5 million — a hefty sum of money for a small startup.

In December of 2010, RelayRides made its first debut in Boston, Massachusetts.

Not Your Local Rental

Turo has streamlined the process of online rental service by hosting its services on their application, Turo Go, or their website. Unlike any other companies which own the vehicle that is rented, any car owner can put their car up for rent online. If any of the hosts’ property is damaged, Turo can cover up to $750,000 in liability insurance. Furthermore, hosts are given protection plans before they begin, with different percentage earnings and benefits. The company also provides 24/7 customer service to renters and hosts.

Hosts can make contactless key exchanges with their renters by purchasing and installing the Turo software and hardware inside their cars to lock and unlock the doors, a GPS tracker to track their cars, and additional supplies to store their keys. Renters can unlock the car with their smartphone and get the key inside the car after they confirm their purchase. When their session is over, they can lock the car for the next customer.

Unlike any other rental, Turo offers a huge variety in their vehicle selection, ranging from the tamest to a car owner’s wildest dreams. The company provides many types of automobiles, such as cars, trucks, SUVs, minivans, and vans to maximize the renters’ experience. It also has a large choice of brands of vehicles, ranging from the classic Toyota to the sleek Tesla to the grand Bentley. Furthermore, renters can sort out any preferences they choose, for example, types of transmissions, certain features, and even the color of the car.

“Instead of renting the generic fleet vehicle, [our customers] are interested in renting some of the unique cars we have in the marketplace.”

– Andre Haddad on a wide selection of cars

In 2011, the first year of operations, RelayRides managed to generate more than one thousand regulars and fifty cars serving them. At the same time, RelayRides made its first domestic expansion to San Francisco, California, where it also moved its headquarters from Boston, Massachusetts. In the following years, RelayRides continued its growth in the United States.

and Lyft, another mobility company, all of which are located nearby Turo’s (RelayRides) early operating areas.

Despite the cut-throat competition from three different companies, RelayRides managed to win over ZipCar’s popularity and maintain its user base, halving Zipcar’s value from $1B to $500M in 2013. Due to its huge popularity, RelayRides renters, hosts, and fleets doubled in size. In the following years, Turo received a total of $52.5M from a myriad of impactful investors, including Canaan Partners, Google Ventures, Shasta Ventures, and Trinity Ventures.

On the 7th of March, 2013, Shelby Clark declared that he would step down as CEO because he believed that “his employees are more skilled than him.” Replaced by Andre Haddad, founder of Lebanese Shopping.com and iBazaar and former SVP of eBay. Haddad is determined to drive the company forward.

“I’m a founder. I like building things and solving problems. I’m inspired to start something new, and branch out on a new adventure.”

– Shelby Clark on his CEO resignation

With its business continuously prospering, Turo had to find a way to enlarge its assets and capacity to keep expanding. Between 2013 and 2015, Turo acquired two companies, which are Wheelz, a car-sharing service, and SocialStudio, a mobile app development company. The company horizontally merged with Wheelz to decrease competition and increase overall operational assets, whereas the acquisition of SocialStudio was to further improve its efficiency through the design of its mobile app, Turo Go.

Turo began its first international expansion in the United Kingdom, Canada, and Germany due to the high amount of tourism in the aforementioned countries in 2016 and 2017.

After integration into the European market, Turo has accumulated over 8,000,000 users, with one-third of the user base coming from the European expansion. Additionally, Turo has almost total coverage in the United States with an exception of a few states, such as New York due to legal disputes. The company also raised a total of $104 million from a series D fundraising campaign by Sumitomo Corporation, a Japanese trading company; American Express Ventures, an American venture company; SK Holding, a South Korean Conglomerate; and many more. Seeing potential in international demand for car-sharing services, Turo kept on expanding to cities around the globe, ranging from the island of Iceland to the sandy hills of Dubai.

To expand the brand in Germany, Turo has offered $92 million to have the rights to Croove, a year-old Berlin-based car-sharing service operated by Mercedes Benz. The acquisition of Croove not only added its luxurious variety of cars to the Turo rental car range of options but also Mercedes Benz’s management principles and strategy inherent in Croove’s business model. Mercedes Benz agreed to the investment proposal, and after a few months, Turo was in Germany.

In July 2019, InterActiveCorp (IAC), made its largest investment in Turo’s series E round with a whopping $250 million in venture capital funding, making IAC the largest shareholder and owner. This also pushed Turo’s monetary value to $1 billion, causing the startup to reach unicorn territory. In the same year, Turo had more than 10 million users and 400,000 automobiles listed on its website.

The Rental Car Apocalypse and Beyond (2020-Present) 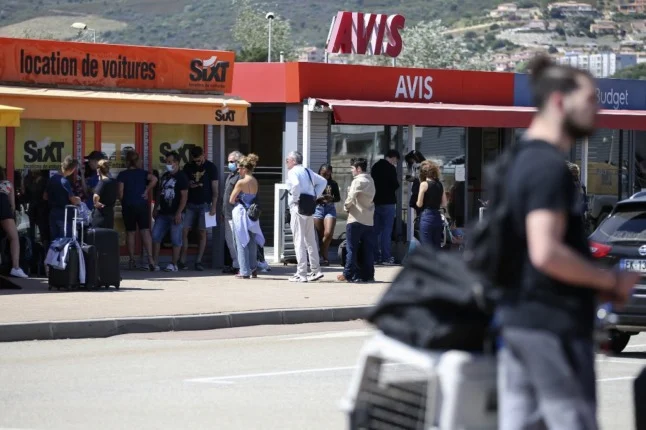 Lines of people waiting outside of rental dealerships during the COVID-19 pandemic in 2020 grew as the tourism industry came to a halt. In order to prevent further infections and deaths, the pandemic resulted in a substantial decrease in demand for rental cars. With ridership declining by 61%, major rental services, such as Hertz, Avis Car Rental, or AutoSlash, sold off some of their fleets and downsized their workforce to cut expenditures amidst looming bankruptcy. Hertz didn’t adapt well. Racked up to the gills in debt, Hertz — one of the oldest, longstanding car rental institutions — went bankrupt in the fall of 2020.

However, the storm wasn’t quite over yet. When restrictions against tourists were lifted, there was a surge in demand for rental cars as travelers took to the road for travel, avoiding potentially infectious airports and planes. As many rental corporations had already sold most of their fleet, they could not serve every customer in a short period, causing huge lines of soon-to-be renters in front of dealerships. Furthermore, the price of a rental car escalated in line with demand versus supply, sparking what economists called “the Rental Car Apocalypse”. Moreover, the semiconductor shortage causes the price of automobiles around the world to skyrocket, making it difficult for any car rental company to purchase a brand-new set of operational vehicles.

Turo didn’t miss a beat. Since Turo does not own its vehicles, the startup has no fleet to have to sell off or repurchase. Regardless of the lower demand for transportation during the pandemic, Turo grew 6% in 2020 with a steadily increasing amount of localized car rentals for people handling errands and basic day-to-day travel.

In 2022, Turo acquired OuiCar, another ride-sharing company headquartered in New York, completing Turo’s coverage of the United States. Also now operating in France as previously seen as an opportunity by Haddad, Turo continues to succeed in traditionally entrenched, competitive markets.

Turo officially filed for the New York Stock Exchange (NYSE) as of early 2022, and investors wait for its stock to be available on public exchanges with JP Morgan and Morgan Stanley leading the offering.

After a decade of adventure, discoveries, and struggles, Turo is a far cry away from a cold bike ride in Boston to Clark’s rental car. Turo started from a small car-sharing startup that barely had any user base to a breathlessly awaited IPO offering. With the determination of Clark and Haddad and support from investors, they both managed to change an industry for the better, inspiring a new generation of entrepreneurs all because of a single complaint. Their adventure in the wide world of car-sharing has shown that an idea can change the world forever.

The Economics of CubeSats